Choosing the Perfect One-Size Diaper for your Baby 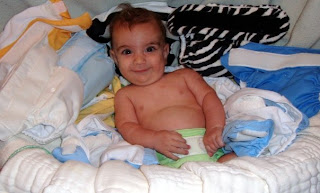 There are so many one-size options out there and everyone has a different opinion on them. How do you choose? What makes one better than another?

At Wee Little Changes, we carry a wide variety of one-size diapers-all great for different reasons. Here's a list of the ones we have available right now:

When choosing the diapers I wanted to use, I started by looking at the most popular brands that I'd heard good things about. Both bumGenius and Fuzzibunz were the ones I started with, along with some others that WLC doesn't currently carry. I ultimately decided on bumGenius to start and purchased a couple to use as night diapers for my daughter just before her second birthday when she was beginning to potty learn.

The first thing I looked at for each diaper (beyond the brand and reviews) was weight range. Since the BGs claimed to fit a baby up to 35lb and my daughter only weighed around 25lb at the time, I figured we'd have no problem with fit. Luckily I was right. She is short and thin, with very thin thighs and little to no butt. The tallest rise setting was perfect for her, though she could have used more absorbancy in the way of inserts in those diapers; they were on her all night, after all.

When I was pregnant with my son later that year, I looked at things that mattered more. I took a look at rise, waist, and thigh measurements, quickly learning that the weight range didn't matter so much as all those measurements. I read story after story of babies who didn't fit the diapers within the weight range because their measurements didn't match up with the diaper. I also read stories about women who hated one diaper because "it leaked" or "it rubbed the belly" or any number of other reasons while other mamas raved about that same diaper for the exact opposite reason! The more I read, the more confused I became! Why would the same diaper leak on one baby, but not on another?

As I read more, I learned that the leaking was caused by fit. Fit is something you can't really be certain about until you try out the diapers on your baby yourself. So then I decided that I would try several different brands and not put all of my eggs into one one-size diaper basket. In my very first stash (looking only at the one-size diapers) for Ian I had:


After trying them out, I fell in love with the BGs and the BBs. I wasn't so wild about the HHs or

the FBs in the beginning. Now that Ian is older, I find myself reaching for our FBs before anything else. I also really the Knickernappies and Tiny Tush that I've acquired and love the BG4.0s.

So, in the end, choosing the perfect one-size diaper for your baby is something only you can do. You'll have to read the reviews, see which diapers worked for babies built in a similar way to yours most often (thick thighs, buddha belly, no heiny, etc), and give them a try!