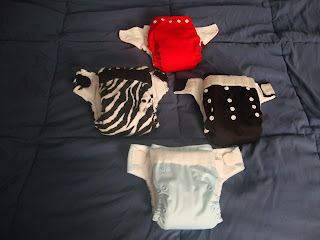 Yes, really! They can last for years if you take good care of them and say a few prayers along the way. To the right, you'll notice a picture or two of 4 cloth diapers. From the top and clockwise around they are: 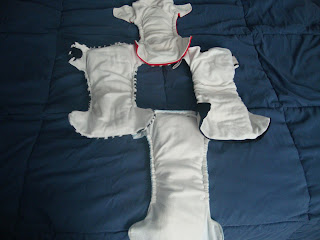 it used. I'm sure you can guess which one just by looking at this picture of them, and while they don't all look brand new anymore (far from it, actually!), they all work well and still do their jobs.

When I looked at the calendar this morning to prepare for this post, it occurred to me that it's been 3 years since I first suspected I might be expecting my little man. 4 years since I began to realize that there was a chance I would get to nurse another baby, cloth diaper a baby for the first time, try making my own baby food for the first time...and that's when I realized just how old those cloth diapers are!

The red FuzziBunz was bought sometime between April and June of 2009. I can't remember exactly when I got it, just that I know I had it when Ian was only a few weeks old. There's a picture to prove it somewhere...

The Blueberry one-size diapers were bought at the same time on a super after Christmas sale and I believe the site was discontinuing them from their store. Either way, I got a really good deal on them. I got them at the end of December 2008 or possibly early January 2009. Keep in mind, though, that Ian wasn't born until May 2009 so we've just celebrated the second anniversary of these diapers' use. Lol.

The black Happy Heiny was a last minute purchase from a cloth diapering friend. I wanted a diaper that would match our black and red flame Babylegs and she agreed to sell me her black one. I didn't care how old it was, I just wanted one that matched. And even better, it was a brand I'd been dying to try anyway. So just before Ian was born, I bought that one from her too. Doing the math, it's at least 4 years old now.

So how do you make cloth diapers, pockets in particular, last a long time? This is how I did it:

1. Line dry only! Not only is it better and easier on the PUL, but it's better for your velcro and elastic too.

2. Space the diapers out. If you can, try not to use the same diapers day after day, week after week. Try to give them a little break in there. We have enough diapers of varying kinds that I could cloth diaper 2-3 kids I think! One would be in pockets, another in prefolds and covers, and one more in fitteds and Flips! I like it this way too, because then we can give some of our diapers a break from the routine.

3. Replace parts as necessary. Now I, admittedly, have not replaced anything on my diapers to date, but if you notice that your elastic is stretched out or your velcro isn't sticking anymore, replace those parts. Most manufacturers offer replacement parts for a small fee and you can often find instructions for doing it yourself with a quick google. 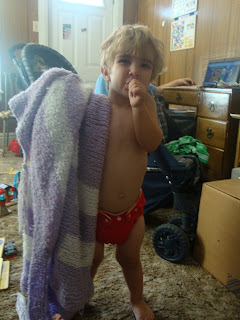 4. Use cloth diaper friendly detergent. It will help your diapers! Detergents with the addition of additives as listed on various detergent lists will ruin your diapers over time.

5. Try different inserts. In my experience, microfiber doesn't last forever and often collects stink pretty quickly and easily. If you like your microfiber, keep using it! If you're like me and don't love it or are noticing it's getting dingy and yucky, then try something different. I like to use prefolds trifolded into the pocket. I also like hemp, but don't have a lot of that.

I hope these tips help you out! Let us know in a comment if you have any other ideas for making your diapers last! We'd love to hear about it! :)

so do you mind if i ask how many diapers are in your stash? The ladies at the local diaper store know me very well. As I think I'm the only one that does not have a child but buys diapers. I'm just not sure when to stop and they aren't going to tell me to stop lol..... I have about 24 but i know that I will need more because we want more than one child but would like to cut down on the wear and tear.

Hmm...how many? Let me think. I'll try to list what I currently have below (this doesn't include what I've gotten rid of and replaced over the last 2 years). Keep in mind that I'm diapering a 2 year old who doesn't need changed as often as he did when he was a newborn and an infant. He probably goes through 6 diapers a day now whereas before it was more like 10. So we are washing every couple of days. When he was younger we had 20+ pockets alone plus the other stuff.

I feel like I'm probably forgetting something, but I don't know. That's the bulk of our stash as it stands right now.