Is It Potty Time? 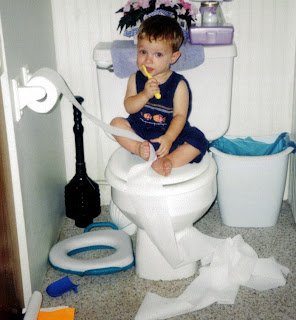 When my oldest was two and a half, I decided he was ready to potty train (notice I said potty train, not potty learn). He was very smart and extremely laid back, always going with the flow. So when I decided it was time, he went along for the ride with no complaints but lots of accidents and was completely trained within two weeks. That two weeks was absolutely awful, but we both lived through them.

So when child number two reached the golden age of two and a half, however less laid back, less likely to go with the flow, and entirely too smart for his own good (or maybe for my own good, lol), it was no two weeks and then done. His training dragged on for months with no signs of it ever coming to an end. But I was too stubborn and too pregnant to look back at diapers again. So we plowed on…very slowly. He finished by the end of the summer and we had no setbacks when his new baby sister came along.

My thinking started changing with her. When she was around 18 months or so, she became interested in the potty. Rather than discourage her (since I was not ready to go through it again), I let her sit on the potty anytime she asked. She never did anything though. She just sat there and then would say "all done." She'd go on her merry way and I would sigh, wondering if this was really making any difference with her.

Then one day, just before her second birthday, she came up to me and said what she'd said a million times over the last six months (or so it felt like at the time, lol). "Can I go potty?" (And yes, she really did talk that well. She was asking me to nurse with our special nursing name at just 10 months; she was and still is very smart). I was tempted to say no, since I was making dinner, but I had this feeling that I should say yes. After all, she was still learning and it wouldn't take that long.

I put her on the potty that evening and that's when it happened. She actually went! :O I couldn't believe it. I hooped and hollered and cheered for her. I called my husband and my mom. We told her brothers. We made a huge deal over the fact that she did it. But I still didn't think this would continue. It was a one-time deal, right?

Wrong! She kept asking! And I kept taking her, all the while thinking that I wasn't ready to go through this drama already. She hadn't reached our golden age. She couldn't really be potty learning. And yet, she was. All by herself she had decided she was ready to use it and wanted to learn. And she did. When she made that decision, she had only a handful of accidents over the first month and then no more. She's five now and has never regressed, even when our youngest son came along.

Our youngest recently passed the 18 month mark and in the months since then has shown some interest in using the potty. I try to always let him use it when he wants to and have even suggested it when he's having a hard time pooping. He's actually made several deposits! And while I am super proud of him, I'm also not going to push him to learn it until he is truly ready.

So how do you know if your child is ready or not? According to all the literature I can find online, the average age of potty learning is 2-3 years old, depending on the child. They'll show most or all of these signs of being ready:

One way that you can start the potty learning process with little resistance or force is to start sitting on the potty pretty young. If it's something they see as normal (even before they can really tell you they need to go), they're more likely to go along with it when they can truly start using it. I like to sit my kids on the potty when they wake up dry in the morning or after a nap. Often times they'll actually go and are very proud of that fact. I've also found it helpful if you can catch them pooping and get them on the potty. My second one was scared to poop on the potty until we finally caught him getting ready to go and sat him on it. He went once and realized it wasn't actually anything to be afraid of. Lol.

Hopefully this has been helpful to some of you. If you see anything you don't agree with, please just pass it over. But if you see something that might help you, give it a shot! We're all parents doing our best for our babies. Have a wonderful Monday!

I've just been thinking about potty training/learning this weekend. My mom was a daycare lady for 10 years, and she found that communal potty time led to the smoothest potty training since the kids would learn by example. Since my daycare lady is not into that method, I started bringing my son into the bathroom with me when I have to tinkle. Then I take his diaper off and set him on the potty to give it a try too! So far nothing, but if I keep it up at least he'll be used to the potty when he is ready. I wrote about it on my blog today. http://mommysmiddleground.blogspot.com/2011/04/playgroup-potty-and-park.html

My son is a little over 2 and has started showing some signs that he's ready. We give him a lot of naked time in the apartment and he can stay dry for hours and hours. Only problem is, he prefers to pee in the shower and with the exception of a few lucky pees in the potty, shows no real interest in peeing on the potty. I'm being patient though because I don't want to discourage him in any way. I just wish I would have started introducing the potty at a much earlier age. I'm due in May and would like to try a bit of ECing once this baby can sit up on it's own. Maybe then the potty wouldn't seem so foreign.