Do I Really Need a Diaper Sprayer?

*Warning! This post may be a little TMI! So if you have a weak stomach, don't read on!* 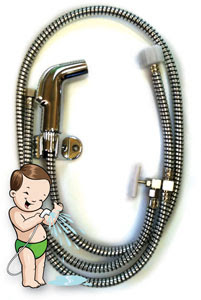 I did without a diaper sprayer for quite a while. In the EBF days, I could just toss the diaper straight into the pail. Anything that was on the diaper would rinse nicely away in the rinse cycle in the wash since EBF poop is water soluble.

But then we started solids. *shutters* The introduction of solid food brought with it a whole host of new issues. I couldn't just toss the diapers in the washer anymore. I had to try to get the poop off the diapers first. Some days that was no problem. I'd just dump what I could in the toilet and be done with it. After all, I was still running a rinse before I ever washed them.

And then it happened. After a bout of constipation, my doctor suggested using a small amount of a laxative to get things going for my dear son again. Only the laxative didn't just "get things going again." Oh no, it made his little bum erupt like a volcano! Ick! I still remember that first diaper that it happened in. It was a fitted. And when I opened it, every single inch of space was covered in a thick layer of gooey poop. There was no throwing that one in the pail and moving on.

"Just throw it away!" hubby suggested (oh so helpfully, I might add).

"No! I made this diaper for him! I'm not throwing it away!" I shot back, shocked by his "solution."

In order to avoid really grossing you out now, let's just say I tried several things and in the end had to rinse the diaper by hand to get it cleared out enough to send it through the wash. That was the moment when I really considered quitting cloth diapering. I mean, could it get anymore disgusting than that?

Yes! The next day, the laxative was still working its magic. Lucky us! This time, he didn't just fill the diaper to the brim. He did something that few cloth diapered children accomplish in their little lifetimes. He had a blow out! In cloth! His first in 7+ months of life.

As I sat there pondering the possibility of a blowout while my dear little boy played happily beside me in the tub, it occurred to me that I could no longer avoid getting a diaper sprayer. Quite honestly, I was tired of the cleanup. It took forever. It was disgusting. And I smelled like poop the rest of the day! That is NOT a perfume you want to be remembered for!

Very soon after that, our diaper sprayer arrived in the mail. Because we have a very old toilet, my husband (an actual plumber, how convenient is that? Lol) had to go out and get one extra piece (I don't know what it was so don't ask! Lol. All I know is that our sprayer works!). He hooked it up and mounted it on the wall. And that evening, I got to test it out when my dear son once again had one of his nasty poops.

This time though, I was able to plop him in the tub and spray the diaper clean. No more poop smell for me! Yay! And the sprayer made cleaning off the excess poop so much easier too! It just sprayed it right off and I could flush the yuckiness away. The other thing that I really like about our sprayer is that you can turn it off or on so you don't have to worry that older sibling hands will find it and spray the whole bathroom!

So, do you really NEED a diaper sprayer? My answer? No, but if you have one, you'll be making your life much easier! Trust me! J

Going now to add a diaper sprayer to my baby registry. Seriously. Thanks for the candid advice. Bun is due in 11 weeks and I'm hoping I'm up for the cloth diaper challenge. Question - What do you use for a diaper pail?

Lol, you're very welcome. As for the diaper pail, I use a trash can with a pail liner. I got the trash can at target for around $8 I think. It works great. I'd also suggest having at least 2 pail liners so you can wash one and use one.

i dont have a diaper sprayer. i rinse all of my baby's diapers by hand in the tub. well, first, i take toilet paper and get when i can get off. my wash routine doesnt include a pre-rinse so i have to pre-rinse it all by hand. each and every single diaper. so, we are doing pretty good w/o a diaper sprayer. i dont look forward to getting one either.

LOL @ 'Throw it away'! That is such a husband answer! Great post!

I went through the same process, our sprayer is on it's way right now!

We don't have a diaper sprayer but I do contemplate it once in awhile... :)

After telling friends we CD one of the first things they ask is about the poop! I am so grateful for our sprayer and suggest it to anyone who is truly serious about CDing. Great story, thanks for sharing!!