A Daffe Designs Review by Kristi 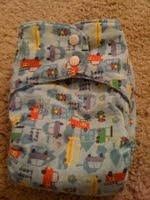 Several months ago, I won a Daffe Designs gift certificate in a Facebook contest to use with Daffe Designs. I looked over her store's inventory and noticed right away that, among lots of other really fun things, Crystal made some adorable fitteds. At that point, I had only ever tried my own homemade fitteds but wanted some others too. So I picked through the various available prints for the fitteds and finally decided on a monkey print for the first and a car print for the second. Actually, the fitted shown with this post looks just like my second one.

Once I told Crystal what I'd chosen, she apparently got to work right away because, as I recall, my fitteds were on my doorstep in a week or less. She worked fast! I love Fluffy Mail so I went about opening the package right away. The prints were just as adorable in real life as they were on my computer screen. J As I do with all of my new diapers, I threw them in with the diaper laundry and quickly did a load so we could try them out.

This brings about the first issue to critique. Washing the fitteds also leads to drying them. So did they dry in one cycle and was there any shrinking? Because I always dry my diapers for two cycles thanks to the addition of tons of prefolds (for stuffing my one-size diapers), I can honestly say that these fitteds were dry when everything else was but I can't be sure they were dry after just the one cycle. I suppose it really wouldn't be fair to expect them to be dry after just one cycle but not the rest of my diapers. Lol. As for the shrinking, I didn't notice any but then we didn't try them on before washing. I looked them over, opened them up, compared them to Ian- all before washing them, but we didn't actually put them on at that point. Maybe that was risky, I don't know.

One of the nice things about the Daffe Designs fitteds is that they are sized and therefore trim. We got two mediums for Ian. He's a small little man with no buns so this seemed like the best decision. The first time he tried them on I was impressed with the trimness. Because I don't really own very many sized diapers of any type, this was new for me. I added a PUL cover over top of the fitted, pulled on his pants, and looked him over. It looked like his bum was no bigger in that fitted and cover than it would have been in a sposie. But did it work?

I got the answer to that question pretty fast; Ian loves to really put his diapers to the test by giving them a good poop when they first get on his bum. Lol. It almost never fails. We get new diapers and he poops in at least one of them within minutes. So when we tried out our first one, he pooped in it almost immediately and then we put on the second one, which we actually got to put to the test for more than 5 minutes. The plus side to his quirky diaper testing strategy is that I was able to test out the diapers for everything all in one day. He didn't have any leaking at all and he can really pee.

So all of that happened within a couple of days of getting our new diapers, but how are they now? It's been at least three months (I've lost exact count at this point) and I can say with confidence that we still like them, we still use them, they've held up very well, and most importantly, they don't stink.

In conclusion, I really like these fitteds. It was fun building my own and looking through all the patterns available. And they're really nice to use with wool too. I like putting these on and slipping some longies over them. Very cute! Thanks for a great diaper, Crystal!