Why Should I Co-Sleep? 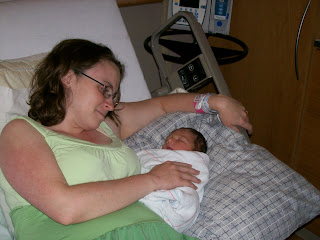 This one is tough for me to talk for or against. When I had my first son, I was strictly against co-sleeping. The idea scared me to death. I was so afraid I would roll on him. That fear made middle-of-the-night feedings unbearable (he nursed for at least 30-45 minutes each time) since I was so scared to fall asleep with him. The one time I ever did fall asleep with him, I awoke an hour later freaking out. He was fine of course, and asleep. Lol.

Three years later, I gave birth to my second son. But there was an issue. Soon after his birth, my husband had emergency surgery which meant neither of us could easily get out of bed in the middle of the night (I have c-sections and long recoveries, just FYI). I decided to go against the fear from years earlier and try sleeping with my baby. After all, I can't easily get up, he won't sleep as well without me right next to him, and I need sleep. So we do it. It was wonderful, honestly. The three of us had a great night sleep for once. Anytime Lukas needed to eat in the middle of the night, I'd half wake up and help him get latched on and slip back into sleep. It was heavenly and I couldn't believe we hadn't done it earlier. We continued on that way for 10 weeks before Lukas moved to his own crib.

Another three years passed and our daughter came along. It had worked so well for Lukas that we decided some temporary co-sleeping was the key to a good night's sleep with her too. Like her brother, my daughter slept better in bed with me. But after just 4 weeks, I was ready for her to move to her own bed. Everytime I woke in the middle of the night, she was smack up against me. The old fears of rolling on my baby surfaced again. We tried putting her in the bassinet against the bed, but she was restless being so close and yet so far from us. We moved her to her own room and she slept better. We all did.

There's a theme here if you didn't already noticed and we continued with it for baby number four. Our youngest son came along three years after his sister. By the time he arrived, I knew he'd be sleeping with me for several weeks. I didn't even attempt to have him sleep in the little hospital bassinet (the picture above is him with me in the hospital, though we're obviously both awake lol). He slept in my hospital bed from night number one and continued on in our bed at home for weeks after that. But this time wasn't as pleasant and smooth as the last two. Ian was a screamer for at least one hour every night for three weeks. He literally screamed at the top of his lungs, inconsolably, in the middle of the night- around 1am. It was awful.

But while I was all too eager to send him packing to his own bed (at least in the middle of the night when I was exhausted and desperate for sleep!), his own bed was in the same room as his older sister. I felt like putting him in there with her was like passing my screaming little man onto her. I couldn't do that. So he spent a few more weeks sleeping in the bassinet in our room.

If you read this article from Dr. Sears, http://www.askdrsears.com/html/7/t071000.asp, you'll see that he defines co-sleeping as "sleeping within easy reach." It doesn't necessarily mean only sharing a bed. Good news for people like me, who want to do what's best for my babies, but am scared to death to sleep in the same bed as that sweet baby.

These are some of the benefits of co-sleeping that Dr. Sears offers in his article:

"1. Sleep-sharing pairs showed more synchronous arousals than when sleeping separately. When one member of the pair stirred, coughed, or changed sleeping stages, the other member also changed, often without awakening.
2. Each member of the pair tended to often, but not always, be in the same stage of sleep for longer periods if they slept together.
3. Sleep-sharing babies spent less time in each cycle of deep sleep. Lest mothers worry they will get less deep sleep; preliminary studies showed that sleep-sharing mothers didn't get less total deep sleep.
4. Sleep-sharing infants aroused more often and spent more time breastfeeding than solitary sleepers, yet the sleep-sharing mothers did not report awakening more frequently.
5. Sleep-sharing infants tended to sleep more often on their backs or sides and less often on their tummies, a factor that could itself lower the SIDS risk.
6. A lot of mutual touch and interaction occurs between the sleep-sharers. What one does affects the nighttime behavior of the other. "

So, while I've done some co-sleeping, I'm definitely not an expert. You'll have to do the research on your own on this one and decide if it's the right thing for your family. In our case, co-sleeping worked for the first several weeks of our babies' lives but it didn't work for us after that. On the other hand, I have several friends who still sleep with their kids regularly and the kids are not babies anymore. So, what will you do?
Posted by Kristi26 at 7:24 AM

Email ThisBlogThis!Share to TwitterShare to FacebookShare to Pinterest
Labels: co-sleeping, Wee Little Changes, why should i co-sleep

I still co sleep with my toddler. Sometimes its nice but sometimes its horrible. He kicks, smacks, hogs the bed, etc. I adored co-sleeping while he was small and breastfeeding but now I just want it to be over with

Our 7 month old co-sleeps, as in he sleeps in our room and within easy reach but usually not in bed with us unless he's unusually fussy. He's also a bed hog if he's having a normal night.