The first time I tried babywearing, I hated it. My oldest son (now almost 11) was just 5 months old, but already he was tipping the scales at nearly 20 pounds so the stretchy ring sling I had just wasn’t a good fit for us. The other issue was that he wasn’t a particularly cuddly baby. He loved to be on the go and socialize with as many people as he could. He was quite happy rolling around on the floor and inching anywhere his little body would take him. So I gave up.

Fast forward about three years. I had just given birth to my second son and he was always sick, which meant almost always grumpy. He had a milk sensitivity (which meant no milk for me since we were nursing), he had GERD (reflux), and he had an ear infection every 4 weeks like clockwork. Actually one time, we went 5 weeks and then had to visit the ER in the middle of the night only to discover he had a double ear infection. Sigh. I was desperate for some quiet time after just a couple of months and a good friend suggested I try wearing him.

I hesitated. I’d already tried it with DS1 and didn’t really like it, but she was sure it would help him calm down and feel better. She showed me an upright position for him since his reflux made it uncomfortable for him to lie in a cradle position. He loved it and fell asleep almost right away!

That was just the beginning with him. Soon, I bought myself a better ring sling to use and had him in it for hours at a time. He slept like a dream in there and wasn’t as fussy anymore (but he still had all the same issues). After awhile, I noticed that the shoulder I always wore my sling on was really hurting. It turns out that you’re supposed to regularly switch shoulders when wearing your baby in a sling. Despite having this knowledge, I continued on. After all, the sling made using one arm all but impossible and if I was going to have that issue, I needed my right arm to be free so I could use it.

When he was older and no longer very interested in the sling, I found out I needed physical therapy for my shoulder. All that one-sided babywearing had really done a number on it. I went for weeks, maybe months, and vowed never to wear my baby on just one side again. It was at that point that I began wondering about a dual shoulder option.

So when my daughter came along, I knew we wanted to give babywearing another try but I was hesitant to use my ring sling. Still, I had no idea where to even begin looking for another option and at that point I thought the choices were sling or snuggly. I had no idea how many wraps, carriers, and slings there truly were out there and I didn’t do the research to find out. As a result, she wasn’t worn nearly as much as her older brother. 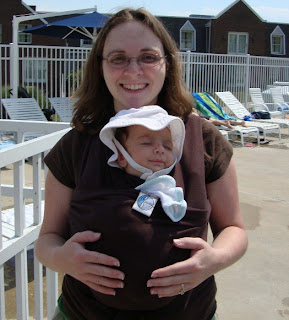 It was when I was pregnant with my most recent baby that I discovered the existence of the moby wrap. My best friend wore her foster son into church in it and I fell in love instantly. I asked her all sorts of questions: how did you get that on? Where did you get it? Is it comfortable? Does it hurt your back? After she showed me how she put it on, told me where she ordered it, and assured me she was comfortable and her back didn’t hurt at all, I was sold. I had to have one for our newest son yet to come. And I got for my birthday. It was the only thing I told my husband I wanted. He very sweetly ordered it and gave it to me.

Five months later, just after our youngest son was born, I wore him in it for the first time and it was the beginning of the end of my search for our perfect babywearing device. I know not everyone loves the Moby Wrap, but I most certainly do and would never use anything else. DS3 practically lived in that thing some days and my back/shoulders never suffered for it. We took it to church and wore him around that giant campus, we took him to amusement parks in it, we went on vacation in it…the list goes on and on.

I suppose what I’m trying to tell you here is this: if you’ve tried babywearing and hated it in the past, don’t give up on it yet. It’s an incredible thing to do for your baby and you just might end up loving it if you can find the perfect carrier for you and your child.
Posted by Kristi26 at 7:54 AM

I hated it with my first two and then I too discovered the moby...the best thing ever!

I use the baby bjorn and love it - as does my son! He gets all excited when he sees me pull it out because he knows he'll be spending mommy time.

That is such a beautiful picture! With my first, I wanted a Moby because of the rave reviews, but could not afford one (and had no idea about making SPOC wraps at the time). I got an Infantino crotch dangler instead and we both loved it... except that by 4 1/2 months, she was 20 lbs, had outgrown it and my back was killing me by 3 months! A local mama friend was starting up mei tais in her business and asked if I wanted to be her guinea pig--just supply the fabric and a small fee for the labor. The mei tai is STILL my favorite carrier.

Another mama gave me a free SPOC wrap when she was around 6 months old, but I didn't really get the hang of it. I learned from a youtube video and practiced with a doll when I was pregnant with my second and she basically LIVED in the wrap for the first few months until she was big enough for the mei tai.