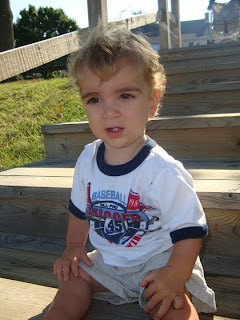 Confession time. But it isn’t about me. At least not directly. You see, my youngest, Ian doesn’t eat fruits or vegetables. Last night, I caught him playing with a piece of broccoli but he wasn’t eating it. Occasionally I can get small amounts of applesauce or fruity yogurt into him, but he’s one and a half, he doesn’t want Mommy to feed him anymore. So what’s a Mom to do?

Our doctor suggested vitamins, which I have, but I’ve also decided to do something I never thought I’d do. I’m hiding the fruits and vegetables in the few things I know he loves and can’t resist. Breads and desserts are high on that list.

So the other day, I found lots of healthier dessert recipes in Woman’s Day magazine. You can see our favorite here: http://www.womansday.com/Recipes/Monkey-Bars-Recipe

I’m also copying it below. I’ll add some ideas to make it your own too after the recipe.


Some changes. When I made this the first time, I changed the white whole-wheat flour to regular whole-wheat flour. I also used regular-sized chocolate chips and soy milk (I have a lactose intolerance). And because Ian struggles in the poop department, I added some extra fiber to these in the form of Benefiber. Wheatgerm would be a good addition as well.

The next time I make these, I’m planning to substitute vanilla yogurt for the oil. I’m also considering subbing ¼ cup of applesauce for ¼ cup of the brown sugar. I’m not sure yet on that one. And I’m thinking about making these into a brownie by adding some cocoa powder and a little melted chocolate. Another idea would be to add some peanut butter for extra protein.

Try them out for yourself and tell us what you think!
Posted by Kristi26 at 7:58 AM

Those look good! I might try them out this weekend ;0)

Good to know that, these healthier recipes will make the little Children eat their food and get the required Nutrients and vitamins.