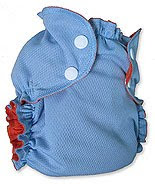 Anyone who’s seen a swim diaper knows that a cloth swim diaper looks very much like an empty pocket diaper or a cover. How does it keep any messes contained? Won’t the urine just leak out? Should I put something else inside to catch the pee? Is this the one time when disposables are better? And why on Earth would you spend the money on a swim diaper when you could use an empty pocket instead? Aren’t they one in the same?

Swim diapers are designed to contain any bowel movements created in them. They aren’t designed to hold urine, whether the swim diaper is a disposable or cloth. Furthermore, they are designed with this intent in mind while covers and empty pockets are not. So in short, no; they aren’t the same and you shouldn’t use an empty pocket or a cover in place of a swim diaper.

So if they aren’t designed to catch pee, should you put something inside to catch it? No, you don’t have to. I put an infant prefold inside my son’s swim diaper because he wears the swim diaper on the way to the pool or the local water park. I don’t want to have a wet car seat or worse, a wet shirt from carrying him to the pool. Yuck! You could also solve this problem by changing your baby into their swim stuff just before entering the pool.

This brings us to the pool regulations. Most pools and water parks do not allow you to change your baby’s diaper poolside as it increases the risk of contaminating the water closeby. Aside from that, all that is discussed in regards to swim diapers is that they contain the poop. There is no mention of whether it must be cloth or disposable. You can check out the CDC website listed below for their complete list of do’s and don’t’s when swimming with a baby.

My daughter took swim lessons this winter and the swimming school actually told me that they request parents use only cloth swim diapers. They say they have found that they work much better! Plus the disposable diapers fell apart on a pretty regular basis according to them. I thought it was great that they were so strongly suggesting cloth swim diapers! :)

i use a swim diaper in public pools, but for my own kiddie pool at home (no chemicals in it) i usually use just a cover or an empty pocket or even just a ragular cloth diaper, they are good at keeping water out too sometimes! I figure that if it's just plain water from the hose, it can't hurt the diaper because it's washed in the same water! That way I don't have to worry about having a clean dry swim diaper when we do go to the pool.

I do the same in a pinch, Heather. Before I got my Applecheeks, I used a Dappi cover over a prefold (again, because I like to dress him to swim before we leave the house) for DS and it worked just fine. It wasn't ideal, but it did the job.

Thanks for sharing that, Elwell's Weekly! I wish more pools and more of the public in general would recognize the effectiveness of cloth over disposables! :D