My Journey to Cloth Diapering by Allison 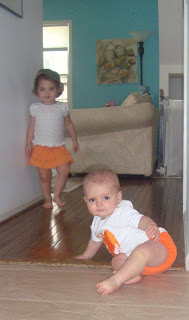 I thought I would be the last person to embrace cloth diapers, mostly because it was my husband’s idea. Imagine a man who leaves for work around 4:30 a.m. with his blessed little angels soundly asleep in their cribs and returns home most nights just in time to kiss their freshly washed faces and tuck them right back in their cribs. Don’t get me wrong, he is a very involved parent and has no problem handling a poopy blowout on his watch, but still what right does he have to tell me I need to switch our six-month-old son to cloth diapers (at almost exactly the same time we started potty training our two-year-old daughter)? His reasons for the switch were economical. We live mostly on his income and money is always tight. He reasoned cloth diapers could be a way to cut back. I brought up the usual arguments: What about the costs associated with running the washing machine more? What about the “ick” factor of having to handle poopy cloth diapers? Mostly, I just couldn’t believe he had the audacity to tell me to increase my already challenging workload at home.


My husband did not let it go. Even though I was less than enthusiastic he brought up the cloth diaper idea several more times. Finally, I agreed to check out the Wee Little Changes website and discovered a program where we could rent diapers and try them out for a few weeks. This seemed like a good compromise as we wouldn’t have to spend a lot on cloth diapers that we may not end up using. We signed up for the rental program and right away a big box of every kind of cloth diaper on the market appeared on our doorstep. I admit, I was completely overwhelmed when I first examined the options. I had no idea what a soaker was or where it went, what the differences were in Velcro and snap closures, what an all-in-one diaper was, etc. But what I knew immediately was that those diapers were adorable. The colors were fantastic and they looked so cute on our son’s little butt.
Maybe we were totally clueless, but that first day we washed the diapers and put them on our son overnight. I thought for sure I was going to be doing some laundry in the morning – of all the crib bedding because that cloth diaper was probably going to leak everywhere – but I was pleasantly surprised when I changed him the morning and everything was right where it was supposed to be. In fact, we didn’t have leaks with any of the different brands we tried. Washing them was pretty easy too. We soaked and used the Rockin’ Green Soap, but didn’t go out of our way otherwise. I turned the diaper pail in my son’s room into the “cloth diaper pail” and just rinsed them off in the laundry tub when the pail was full.
When the rental program was up, I was definitely sold on the merits of cloth diapering. It didn’t feel that different from disposable diapering and I liked the idea of keeping some diapers out of the landfill. Also, our son has eczema and even though it’s not on his bottom, we thought the natural fibers of the cloth diapers couldn’t hurt. So we took the plunge and bought a 12-pack of the one-size diapers. The colors we had to choose from were amazing. It has gotten to the point where my husband doesn’t want our son to wear pants or shorts, but just his t-shirt and diaper because they are so cute. And of course we had to get a swim cloth diaper for the pool and beach.
We have been really happy with our cloth diapers, and I have even tried to convince some of my urban mama friends to give them a try as well.
By Allison, Mama to Jackson (10 months) and Avery (2 years).
Posted by April at 7:22 AM

Thanks for sharing. I don't think I've ever read of the husband wanting to cloth diaper and the wife being reluctant! Glad to hear you were 'won over' =)

This was a great post, Thanks for sharing Allison.

thanks for sharing! I'm also thinking of renting from WLC to see which CD I like the most, everyday I'm more into it!

For those who are interested in the rental package, you can view it here: http://weelittlechanges.com/item_83/Try-It-Rental-Package.htm

It's really a great plan. You get a ton of diapers for very little money. It's a great way to try it without a commitment. :)