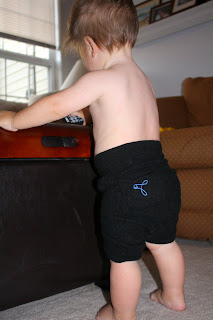 My new challenge was nighttime diapering. Baby T was a supersoaker. I don’t know how one small child could generate so much urine, but he did. I had to dress him in pajamas that were 3 sizes too big just to fit over his J-lo sized butt at night because I had stuffed him so full of cloth. I would put him in a Bamboozle (which is a giant, thick, furry, fitted diaper with its own attached doubler) stuffed with several more doublers and a cover. He still leaked out.

Back to the forums I went. I googled “supersoaker nighttime diapering.” And that’s where I started to read about wool. This was hard to comprehend. Wool can hold up to 30% its weight in liquid before feeling damp. It’s breathable. It’s natural. And even though it’s not plastic, and not impermeable, it was recommended to use for nighttime. I still didn’t get it, but I wanted to try it. But again, I wasn’t sure where to start. There were so many different styles: snappiable covers, longies, shorties, hand knitted soakers… My local store did sell some short wool soakers, but they looked like they would be so hot to wear! And it was August in North Carolina. And I had the sweatiest baby in the world. I was nervous to shell out the $38 for a wool soaker.

Then I started seeing soakers online made from recycled wool sweaters. And as we know, I am the type of person who cannot pass up a chance to make something with my own two hands. Off to goodwill I went. I came home with 3 100% wool sweaters. I paid less than what I would shell out for one cover. Big T tried to steal one of the sweaters. It was striped, from the Gap, and a really nice sweater. Good thing it didn’t fit him. So after some washing, some cutting, and some stitching, I had a brand new wool soaker to try out on Baby T.

It worked! I couldn’t believe it. Baby T slept through the night without leaking onto his sheets. This was amazing, and still a little difficult to comprehend, but the wool is so absorbent, yet doesn’t wick, and absorbs the urine while still allowing Baby T’s skin to breathe.

I started putting Baby T in wool during the day too. People think wool is hot. That’s partly true: it can keep you warm in the winter. But it also keeps you cool in the summer. It helps to regulate body heat. Baby T wears his wool soakers all summer because they are easy to pull on over a snappied prefold or fitted, and they look super cute. I am a sucker for those chubby knees peeking out from the soakers and the little butt with the embroidered pocket.

So on we went like this, until Baby T started eating solids. Now, things got a little tricky. To make an already long story a little bit shorter, Baby T started eating solids and going to daycare right around the same time. Oh, and he was growing. His cloth diapers weren’t fitting him the same way as they used to. If I got them tight enough on the legs, they were too tight on the stomach, and loosening them on the stomach only meant that the leg openings gaped. His poops were starting to be more like peanut butter, and I couldn’t just throw the diapers in the wash. They needed to be… scraped off? Dunked in the toilet? Sprayed? I didn’t want to deal. Also, they wouldn’t use cloth diapers at daycare, so we bought some boxes of disposables and went off the cloth for a while.

I got used to using disposables, but was a little surprised at how quickly I went through the boxes. Wipes, too. I had only bought a few boxes of wipes before, and was now going through one box a week. It was starting to add up. We went on vacation in late March, and this was the first time I was really able to try out my cloth swim diaper. I bought some disposable swim diapers (expensive!) and brought the cloth one too. The cloth one was amazing. Even though Baby T was still not eating too many solids, and his poops were quite liquidy sometimes, the swim diaper held everything inside. I never had a leakage problem, and a swirl in the hotel toilet and a good wash with the hotel soap was all I needed to use to wash it off. I got so much use out of it and barely had to dig into my stash of swim diapers.

This gave me new hope. When we got back from our trip, Baby T started at a new daycare. At this daycare, they provide all of the diapers and wipes during the day, at no extra cost to me. I decided to try going back to the cloth diapers during the weekends. Baby T had grown enough that he fit into them better now, and it would save me a lot of money. Now I rarely have to buy disposables.

The poop issue is still a little challenging. I have to say, looking back, I wish I had cloth diapered Baby T from the very beginning. I could have started out with a handful of prefolds and a few covers. When baby isn’t very mobile, it’s easy to just fold up the prefold, lay it in the cover, and snap or Velcro it onto baby. And if the cover doesn’t get wet, you can just replace the prefold inside without replacing the cover at every diaper change. And the best thing of all—breastfed poop is just liquid. You can just throw it in the wash. It really can’t be easier. But now, Baby T is on breastmilk and eating a small amount of solids. We just sacrificed a kitchen spatula to the cause.

I still am a big fan of prefolds. It’s nice to have a few all in ones or pockets so that when I’m out and about, I can just do a quick diaper change, but prefolds are so absorbent and easy to wash. If they get stained, you can just lay them in the sunshine and voila: instant bleach. And I like the fact that you can just replace the prefold and don’t have to replace the covers with each diaper change. Especially if you’re using wool covers. Wool covers are going to be my thing this summer. Baby T looks adorable in them. They really help with his sensitive skin in sweaty August.

The moral of my story is this: it can be overwhelming to consider cloth diapering if you’ve never done it before. There is so much information out there. Here are some tips to make it easier:

-Everyone has their own preferences, and it’s hard to know what you’ll prefer unless you try it firsthand. It’s not easy to shell out a few hundred dollars for a stash up front. So start with a few diapers. You can wash them every day. You can borrow some from a friend to discover what you’ll really like and what will work for your baby. You can start with a $50 stash and experiment for a week.
-Buy diapers that will grow with your baby. Wool soakers are great for this.
-You don’t have to cloth diaper every day, all day to start with. Just try it out, get the hang of it, and if you like it, don’t worry: your stash will grow. You won’t be able to do anything about it. Even if you buy two new diapers a month, it’s immensely cheaper than buying boxes of disposables. And it’s addictive. You will have to talk yourself down from buying ten new diapers a month.

Email ThisBlogThis!Share to TwitterShare to FacebookShare to Pinterest
Labels: gaby from tmuffin