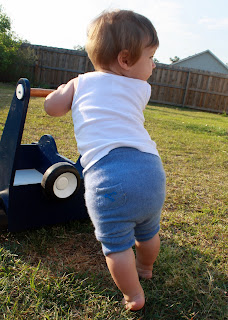 I have always been naturally minded. When I was 6 years old, I wanted to live like Laura Ingalls in Little House on the Prairie. (Ok, I still do). My father used to say that I was born in the wrong decade, that I should have grown up in the 60s or early 70s, in a time when people made their own clothes and grew their own food. I have my own vegetable garden and use rain barrels to collect rainwater for my garden and lawn. So when I gave birth to my first child, it was only natural that I would use cloth diapers, right?

Wrong. At the beginning of my pregnancy, I did a lot of research about how to eat naturally and use natural lotions and soaps. Toward the end of my pregnancy, I learned as much as I could about natural childbirth. But the thought of cloth diapering was a little overwhelming. I had my parents (who cloth diapered using diaper pins and plastic pants) telling me how gross and cumbersome it was, and telling me not to do it. But then I had the rest of the world at my fingertips via the Internet.

You don’t really see any forums about using disposables. But there is forum after forum about cloth diapering. I thought, if this many people are so into it, it can’t be that bad. Cloth diapers are cute. You can get so many different colors and styles that you can really individualize your look. So I decided I wanted to cloth diaper. And I set off to research it online. I pored over posts showing pics and descriptions of people’s “stashes.” I read so many posts entitled “Newbie looking to start a stash. What are your faves?” My head was filling with terms like “prefold, fitted, pocket, snappi, bummi.” I ignored posts with abbreviations like “BG, AIO, PUL.” I felt like I was trying to learn a different language. My head was spinning. I couldn’t understand what the big deal was. Why couldn’t someone just give me a recipe for what to use? Why wasn’t it more standard, the way it is with disposables? This was too hard. There was no way that I could figure this all out before I had my baby.

So I decided that I would start with disposables. I could figure it out after the baby came. It would be easier to use disposables with a newborn anyway, right? Baby T was born in May, and we went through the summer in sposies. Yeah, I knew the lingo now. But I still didn’t know the real difference between a fitted and a prefold, or which one I preferred. In August, I had a friend offer to bring me a box of small cloth diapers to play around with. Her son had outgrown them, and they might give me a starting point.

Well, that was like the first taste of beer for an alcoholic. It was my gateway drug. I was hooked. I tried out prefolds with snappis and covers, fitteds with fleece covers, a pocket with a prefold, and various arrangements of prefolds with doublers and covers. It wasn’t enough. I ran out and bought an organic all-in-one, some hemp doublers, some more covers in various sizes, a Bamboozle, and a cloth swim diaper.

I remember my first outing with Baby T decked out in his prefold and green and white polka-dotted little cover. When I went to get him out of the car seat, though, I noticed that he was wet all around the legs of his onesie. And the wetness was creeping up to his waist. What did I do wrong? I had to know. Poor Baby T stayed in his wet diaper until I could get back to the store where I had bought it. I held up my wet and cranky baby for the store owner and said, “Look! Please tell me what I’m doing wrong!” I think he thought I was crazy. Bringing my dirty baby, who was in obvious need of a diaper change, and expecting to do it in his store? A customer who was browsing the cloth diaper shelves turned to look at me, and calmly said, “Oh. The cover is too big. Go one size down.” And I learned all about wicking.

Cloth is like a vessel that transports wetness. It absorbs a lot of moisture, but if it’s touching another piece of cloth, it will wick the moisture onto that cloth. So if your prefold is hanging out the leg hole of your cover (oops!) then it is going to wick moisture onto your baby’s clothes. The absorbent cloth of the diaper needs to be completely contained by the cover so no wicking occurs.

I continued my quest. During this time of experimentation, I was actually on vacation from work, so I could cloth diaper Baby T for the entire week. Well, when the week was over, Baby T was back in his dad’s care. And dad was not going for the cloth diapers. I get it. When you have your first baby, it’s hard enough getting dad used to the idea that he is going to have to change a poopy diaper at all. So back into sposies he went. But I really wanted to keep using cloth. So when I got home from work, I would change Baby T into a cloth diaper. And he would wear cloth to sleep. And when he woke up I would change him into a cloth diaper. Big T could at least get used to taking OFF the cloth diaper. It was the same exact thing as taking off a disposable. Remove diaper, wipe with moistened cloth wipe, stick the wipe in the diaper, and roll up and toss in the bag inside the diaper pail. Big T could handle that.
Posted by Kristi26 at 7:14 AM

I'd love to see a picture of the front of one of these soakers!

You can see the front here: http://weelittlechanges.com/category_54/Wool-Soakers.htm