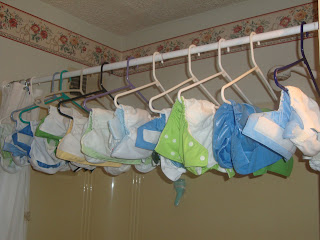 “Those diapers stink,” my husband, Shaun, announced as I dumped the clean diapers on the bed to stuff them.

I sniffed them absently, already knowing they stank. Moments earlier, the stink of old urine greeted me as I opened the dryer door, mocking my efforts to keep the diapers fresh. We were using All Free and Clear on them with little success. It was time to switch detergents.

Next I tried Tide HE after hearing rave reviews on it. Everyone I spoke to claimed it cured their diapers of all the stink problems. It helped a little, for awhile.

It was time for drastic measures. The store detergents weren’t cutting it. I needed something meant solely for my diapers. The catch was that it had to be acceptable for my sensitive skinned son. I wanted something made with a kid like him in mind.

And then I found Rockin’ Green. You can check it out here: http://www.rockingreensoap.com/ or here: http://weelittlechanges.com/item_106/Rockin-Green-Soap.htm

I read the reviews on all the message boards and diaper review sites. I checked out their website and others that sold it as well. Kim, the mom who made it, had sensitive skin kids in mind when she designed it. They even offered a soft rock formula for those with really sensitive skin. It was sounding good. I decided to give it a try and placed an order for two different samples- Monkey Snacks and Peppermint Cocoa. I stalked the mailbox for nearly a week. I couldn’t wait for it to arrive. The moment it did, I threw every single diaper-related item we owned in the bathtub, filled it with water, and “rocked a soak” with our new peppermint cocoa Rockin’ Green soap. I let everything soak in there for almost two hours. Rockin’ Green recommends thirty to sixty minutes. I wanted to give it more time; after all, I had about nine months worth of the wrong soap built up in my diapers. 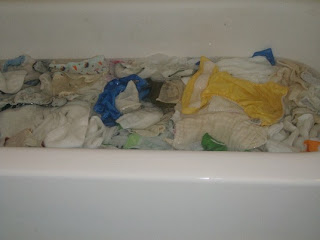 After the very first soak and wash, the pocket part of the diapers and the prefolds I liked using to stuff all smelled fantastic. In fact, they smelled like nothing again! It was amazing. My microfiber however was still holding on strong. It didn’t want to let go of that stink. So I took it and soaked it again for half an hour. After a rewash, it was nearly clear of the stink.

That’s when I made a huge mistake. You know those rubbery blow-up bath tubs you can get for your baby? I decided that it was the perfect size for soaking our microfiber. So I filled it up, added some RnG detergent, and dumped my microfiber in for the night. The next morning, I washed them in the washer and dried as usual. But when I took them out of the drier, they stank like an old, wet dog. I was so upset! What had I done wrong?? It couldn’t have been from the RnG. It didn’t make any sense! And then I remembered the tub. Let this be a lesson to you, never soak microfiber in anything rubber for an entire night. The smell transfers.

Now I had to start all over. So I washed them and washed them with no results. I put them back in the regular bathtub to soak for four hours and rewashed them. I ran them through a hot wash with no soap. The smell was finally gone! Yay!

RnG has been a lifesaver in our house. No more stinky diapers! No more complaining husband! They’ve made a believer of me and I’ll never wash my diapers in anything else. The only thing I’m not sure of now is which scent will ultimately be my favorite?
Posted by Kristi26 at 7:11 AM

wow, that is so weird about the rubber container!

I know! I never would have thought it would do that, but it totally did!

I just had to do the same thing to my diapers--soak them in the tub most of the afternoon. I soaked them with some Rockin' Green and I was surprised that it actually seems to have worked! I wash them with Rockin Green all the time and the stink still happens so I just lost faith with Rockin green. We'll see though, maybe it's better than I give it credit for!

Rubber does smell, yuck. I used to work at a florist, and after a big balloon order, my hands smelled like them for the rest of the day. Thanks for the warning!

Thankfully, we only occasionally have stink issues (we use soap nuts right now) but I would love to try some Rockin' Green. I especially want it so I can "rock a soak" before I start using my dipes for our new baby due in July!

I'm really glad that this actually works... one of the biggest concerns i had when i first started exploring cloth diapering was that they would stink like they did back in my mom's day. it's so reassuring that i should never have that problem, with products like rockin green!

I agree, since I've found Rockin' Green my diapers don't stink when my ds pees anymore, and before I was using a very cloth diaper-friendly detergent: Country Save. I just wish I could buy it locally.